The first time we brought in the Felici family‘s vibrant and delicately salty white wine made wholly from the Verdicchio grape variety the year was 2015 and the vintage 2009. Given the age and modest price for an Italian white one might have brushed the wine off as some undesirable closeout with little life left. Indeed it was quite the opposite. “Vigna Il Cantico della Figura” was drinking so beautifully at the time that we sold it out over the course of a few days – in February!

Three years later we return to feature the 2013 vintage of this same wine. Just like the 2009, the chief Italian wine rating publication, Gambero Rosso, has awarded its highest rating of “Tre Bicchieri” (Three Glasses) for the 2013 vintage of “Vigna Il Cantico della Figura.” In fact, the wine has received this accolade every year in-between as well. As you might imagine, with all the attention comes more demand and a higher price. Fortunately we scored a handful of cases at a fantastic cost and we are able to offer this truly world-class wine at a bargain.

The Italian region of Marche is a breezy landscape of gentle, rolling hills in northern-central Italy between the Adriatic Sea on the east coast and the Apennine Mountains that run through the center of the country. This is Verdicchio territory, where soil and climate create the ideal conditions for raising this legendary grape variety. Verdicchio’s history can be traced as far back as the Fifth Century when Alaric, king of the Visigoths, encouraged his troops with the wine as they crossed the Apennines to sack Rome.

Today, the region is being recognized for producing some of the longest-lived dry whites found in Italy from the Verdicchio grape. In his book ‘Native Wine Grapes of Italy’, Ian D’Agata asserts that “Verdicchio is arguably Italy’s greatest native white grape variety.” Much of the credit is due to passionate winemakers like Leopardo Felici. 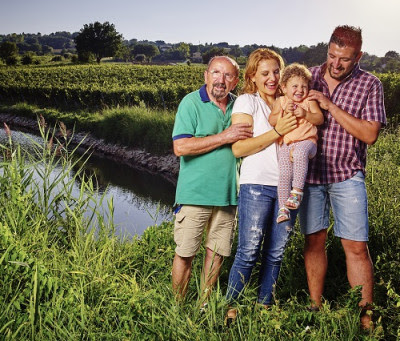 Leopardo is a Verdicchio perfectionist. Soon after taking over his family’s small 25 acre estate in Apiro, the highest of the villages surrounding the town of Jesi, he immediately began transitioning to organic farming to help create the purest wines possible. His wines are rooted in tradition but imbued with a modern sensitivity and have the tension between fruit and minerality found in the world’s great whites. You won’t find many wines at this price level with the concentration, specificity of place, and potential for medium to long term cellar development as “Vigna Il Cantico della Figura.” The wine shows outstanding varietal purity, full of white fruits, hints of brine and almonds, and an epic length reminiscent of lime peels.

The structure of “Vigna Il Cantico della Figura” is formed by the combination of altitude and vine age. The wine is produced from a single vineyard, San Francesco, at 1,200 feet in elevation with an ideal south-east exposure. 50+ year old vines grow from clay-calcerous rich soils that help trap moisture in this arid landscape and deliver wines with lively acidity. Grapes are all hand-harvested and fermentation lasts for two weeks on the grape skins. The wine is then aged in vitrified cement on its lees for 12 months to help build body. Only about 580 cases are produced annually.

And it looks like Punch Magazine recently figured out what we knew years ago. Check out “Vigna Il Cantico della Figura” as part of Punch’s 25 Essential Wines of 2017.