The River Layon, a tributary of the Loire, meanders its way through a variety of soils and rocks. But its in a special place, on the Premier Cru hilltop of Coteaux du Layon-Chaume, where Château de la Roulerie’s superb parcel Les Aunis produces chenin blanc based wines known for their honeyed texture, deep fruit, and marzipan flavor after a few years of age. 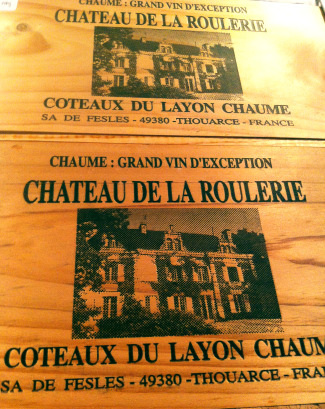 In 1996, Bernard Germain bought the ancient Château de la Roulerie, whose origins date back to the 11th century, from retired pâtissier Gaston Lenôtre. The aim was to make great sweet wines by the “méthode Germain” – fussy vineyard work and careful use of new oak. The vineyards are all located on the slopes and oriented South-Southwest, critical for even ripening in this northerly climate, and are often swathed in an early morning fog that creates a tendency toward botrytis (also known as noble rot, a benevolent fungus that concentrates the grapes). Yields are extremely low.

We have a small amount of this wine that has been stored in our climate controlled store since its release. We recently opened one to sample and found that it was drinking brilliantly. Long and dense with honey, roasted pineapple and crème brûlée that finishes with an ideal balance. It will pair brilliantly with foie gras or Roquefort cheese but can be consumed alone in as contemplative a manner as you choose.