Classic, Elegant 2015 Vintage Burgundy from A Rising Star in the Côte de Beaune

Rodolphe Demougeot’s star is on the rise. Based out of Meursault, since 1992 he has assembled nearly 20 acres of vines in distinguished village and Premier Cru vineyards of Meursault, Pommard, Beaune, Auxey-Duresses, Savigny-les-Beaune, and Monthelie. Although one of the most respected French wine publications, Le guide des vins Bettane & Desseauve, consistently praises his wines for their elegance and finesse, somehow Rodolphe’s work still escapes the notice of most wine pundits – making his wines some of the most significant values in Burgundy. 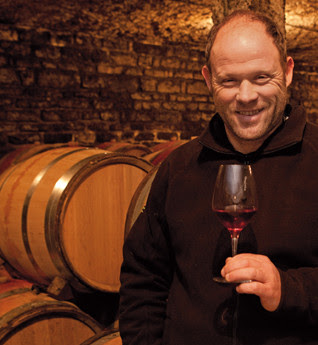 As with all the best winemakers, Rodolphe believes that wine is made in the vineyard. No chemical herbicides, pesticides or fertilizers are applied. He follows the rhythm of the lunar cycle when moving his wines and making picking decisions. He plows his vineyards by horse to aerate the soils. Everything is done by hand and it shows in the ultimate quality of his wines.

Rodolphe believes the 2015 vintage is a great one, with the whites being “expressive, pure and rich in the mouth” while the reds are intense “with ripe red fruit nose” as well as “fleshy, silky and round.”

100% Chardonnay from a 1.5 acre parcel on a plot named “Murger de Limozin” with deep calcerous clay in the commune of Meursault. The vines were planted in 1967, 1986, and 2003. The grapes are manually harvested in small, 600-liter bins. The wine is matured in barrels for one year (10% new oak) and for four to five months in tank. The batonnage is not systematic but decided according to the vintage characteristics. Bottling is done by gravity. The result is a wine with monumental aromas of white flowers, pale orchard fruits, and hints of earth manifested by exotic spice, green almonds, and a dusty stone road. On the palate the balance is ideal between ripe fruit and a lemony, mineral finish with lots of traction.

100% Pinot Noir from a limestone and clay parcel of less than an acre adjacent to the village of Petit Auxey and just west of the Premier Cru plots on the hill of la Montagne du Burdon. The fruit was manually harvested in small crates to preserve the berries. After passage on a sorting table the grapes are fermented in vats for a period of 12 to 20 days. The wine is then matured in oak barrels for 14 to 16 months (15% new oak), and three months in tank. Bottling is done by gravity. The nose is classic Côte d’Or with a perfumed cherry licorice vibe along with some minor notes of fresh, grassy herbs. The vintage personality is clear with rich and ripe fruit balanced by a fresh acidity.

All prices based on 6-pack purchase (mix-and-match)

~$53 “Clos Saint-Désiré” (Beaune 2015)
From an acre parcel of limestone and white marl sandwiched between the Premiers Crus of Les Aigrots and Les Montrevenots and planted in 1986 and 1998. The wine is matured in barrels for one year (10% new) and for four to five months in tank.

~$62 “Les Peuillets” (Savigny-lès-Beaune, Premier Cru 2015)
From a tiny clay and limestone parcel of not even half an acre planted in 1945 and at the southern edge of the appellation. The wine is aged in barrels for 12 months (25% new) and then three months in tank.

~$89 “Les Vignots” (Pommard 2015)
From a half-acre parcel planted in 1983 and located on the northern edge of the commune abutting the Premier Cru vineyard of La Chanière. The wine is aged in barrels for 16 months (30% new) and then three months in tank.

$99 “Le Cœur des Dames – Charmots” (Pommard, Premier Cru 2016)
From a three-quarter-acre parcel on a heart-shaped, enclosed plot planted in 2001 (Le Cœur des Dames means The Ladies’ Heart) The wine is aged in barrels for 14 months (30% new) and then three months in tank.