Despite a hailstorm on the eve of the harvest, 2015 was an excellent year in Chablis. On one hand, the wines reflect the warmth of the growing season with loads of ripe and rich fruit, on the other, they have plenty of freshness and balance. While these charming wines are approachable enough to please a crowd, the top vineyards have the aging potential to complement any cellar. 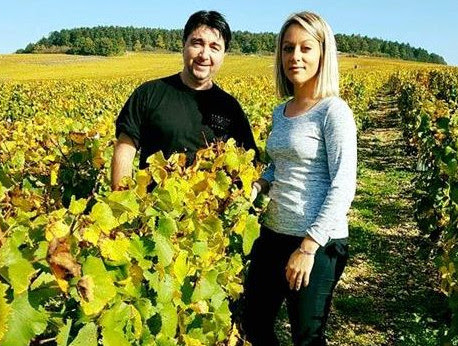 With family roots in Chablis that date back more than 350 years, the Pinsons are one of the oldest families in the region. Indeed, Louis Pinson was one of the first wine growers in Chablis to bottle and sell his wines direct to the public in the 1940s. Today it is Louis’ grandchildren, brothers Laurent and Christophe Pinson, along with Laurent’s daughter Charlène, that continue the family tradition of expressing the famous Kimmeridgian limestone marl of Chablis into wines of precision and cut.

The Pinson’s own 29 acres of prime vineyard real estate in the heart of Chablis, with holdings in six of the Premiers Crus as well as the Grand Cru of Les Clos. In 2003 the estate was modernized with a new press house and expanded cellars. All the farming is done in a sustainable manner without the use of herbicides or pesticides. Yet with all the work to do in the fields and cellars, the family still greets each guest that ambles into their tasting room in the town of Chablis that looks out upon one of the many canals of the River Serein.

One of the most respected French wine publications, Le guide des vins Bettane & Desseauve, rate Pinson as one of the top producers of the year. It’s clear when you taste the Premier Cru “La Forêt.” It is a gorgeous illustration of its type with aromatics of creamy lemon curd and petrichor that linger above a pulsing floral essence. A sip is at first fleshy orchard fruit before a stony tension emerges that lasts long into a classically saline finish. The vines of “La Forêt” are 60+ years old growing on a slope with east, southeast exposure. The wine was fermented in tank and them aged in neutral oak barrels. There is perhaps no better pairing for fresh oysters but we Midwesterners might find that a fresh pan-fried filet of whitefish or walleye would be just as sublime.

All prices based on 6-pack purchase (mix-and-match)

~$80 “Le Clos” (Chablis Grand Cru)
Often considered the best of all the Chablis Grands Crus, “Les Clos” is on par in flavor concentration with the top wines of the Côte de Beaune but with more of a nervy edge. Pinson’s vines have an average age of 50 years with the oldest vines planted in 1962. The wine is fermented in barrel (20% new) and then aged in one and two year-old barrels.

~$49 “Mont de Milieu” (Chablis Premier Cru)
“Mont de Milieu” is just a short hike south from the Grands Crus and is considered one of the top Premiers Crus in Chablis. The 45+ year-old vines here have an ideal southeastern exposure. The wine is mainly fermented in tank (90%) with the rest in new oak barrels. It is then aged in three and four year-old barrels.

SOLD OUT Petit Chablis
A father-daughter collaboration, Laurent and Charlène produce this inexpensive bottling from 35+ year old vines from a vineyard with eastern exposure. The wine is fermented and aged in tank for a poundable expression of Chablis.