Fitou is the very first granted appellation in the southern French region of Languedoc. It consists of two small enclaves, Fitou Haut, a patch of mountainous schist 15 miles inland, and Fitou Maritime, a clay-limestone band around the saltwater lagoons on the coast. It was late 1970s, in the Fitou Maritime, that a retired oenology professor from Orange, Jacques Guérin, launched Domaine Les Mille Vignes. With meticulous attention to the quality of fruit and minimal intervention winemaking, it wasn’t long before the domaine was being recognized for their pure and concentrated wines from low-yielding vines.

The amount of fruit produced per unit surface of vineyard, or yield, is an important aspect in quality winemaking. It’s one of the reasons we’re always talking about old vines that produce less fruit. Low yields from healthy vines can result in wines with highly concentrated flavors and aromatics. The yields of Domaine Les Mille Vignes are miniscule, or less. 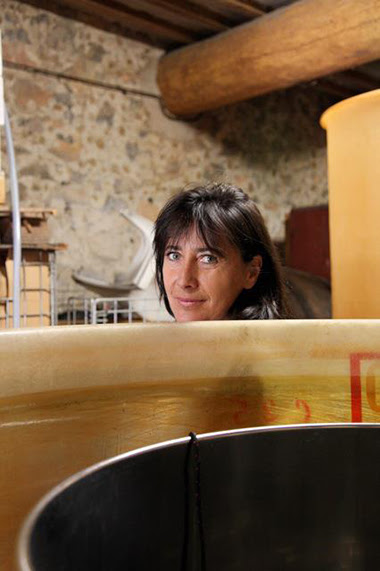 It’s not by luck that their wines can be found on starred restaurant wine lists in Paris. Their old vines and low yields allow the wines to reach their full, seductive potential. With all aging done in stainless steel vats, the wines are all about purity of fruit and the distinction of Fitou.

Today it’s Jacques’ daughter, Valérie Guérin, who is carrying on the ethic of low yields, organic principles, hand-harvesting, and native yeast fermentation. While we can go on about the vineyard management and winemaking, the proof really is in the wine.

Cuvée “Cadette” is a blend of equal parts Grenache, Carignan and Mourvèdre from vines over 50 years old. The aromatics explode from the glass with red currant jelly, wild thyme and lavender scrubland, roasted stones, smoky meats, and soul. The layered palate is full-bodied, ripe, and balanced by freshness and energy. You could rest some in the cellar for five years if you can keep your hands off of it now.

Fitou “Atsuko” 2013
~$71/bottleOnly made in the most exceptional vintages and only about 200 cases produced, 100% Grenache from a single parcel of over 75-year-old vines. Traditional long maceration and tank aging help create a pure, medium-bodied, elegant wine with a grocery list of spice and fruit aromatics. Drink now or over the next decade. “Atsuko” means “blossoming cherry tree” in Japanese, and is named for the wife of a Japanese diplomat who helped inspire the cuvée.

100% Mourvèdre from the original parcel of the domaine planted with 1000 vines, hence the domaine’s name. Tank-aged and classic with dark fruits, marine like minerality, red meat, and floral aromatics. A full-bodied and voluptuous wine. Highly concentrated and structured, it can be enjoyed now or cellared for another 15 years. The name of this cuvée comes from the wild violets growing all around the parcel, and the friends and staff of the domaine, not hired harvesters, who have always done the picking for this parcel.