Old Vines for the Cellar or the Table – Madiran

The lush and gently rolling valley slopes on the left bank of the River Adour in the South West of France make up the small, single zone appellation of Madiran. It’s there, on the southern border of the Armagnac region, that the Tannat grape variety has found its truest expression.

Historically, Madiran’s wines have been considered classic, rustic wines with coarse tannins only fit for drinking alongside the fatty local cuisine like duck, goose, or cassoulet. Naturally, these red wines were rarely exported or even known outside the region. 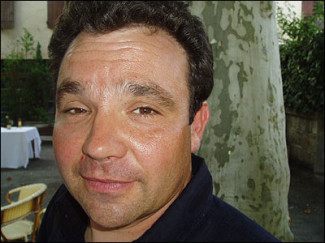 But the 1980s saw the beginning of a revolution in Madiran. Led by Alain Brumont, red wines started being produced with an increased proportion of Tannat grapes, longer maceration times, lowered yield in the vineyards, and the use of new oak barrels to age the wine. These changes led to wines with a rounder finish along with more complexity and depth. Today, Madiran’s best producers are creating wines of balance and originality, as well as potent aromatics and mouth-filling richness. Wines brimming with bold dark fruits when young but capable of developing in the cellar for decades, similar in structure to great Bordeaux wines at significantly lower prices.

After attending oenology school in Bordeaux in the mid-80s, Didier Barré took ownership of Domaine Berthoumieu from his father. As a young winemaker, Didier was very much influenced by what Alian Brumont was achieving at the time and after taking charge of the winery operations he immediately lowered the yields in the vineyards and began oak aging.

2010 Domaine Berthoumieu Vitis MCM is produced exclusively from over 100-year-old Tannat vines growing out of stony clay soils. The wine is aged for a total of 18 months (12 in new oak) before bottling. In the glass it’s dark red, nearly black in color. The aromatics are intense enough to fill our entire shop with notes of cedar and blackberry. On the palate it’s silky and round with exceptional length. This wine will pair well with roasts, stews, grilled meats, dark chocolate and, as we discovered after our bud Johnny Evans of The Howling Diablos stopped by with a midday snack, sliders from Hunter House.