Travel south and west down the coast of Spain from Barcelona past golden, powdery sand beaches and then the seaside town of Sitges, a center for the 1960s counterculture in mainland Spain. Heading inland from there is the Massís del Garraf. A mountain range characterized by limestone outcrops and calcerous soils from which swell an impenetrable scrub of holly oak, strawberry tree, rosemary, gorse, butcher’s broom and dwarf fan palm. This environment is also home to the mastic tree, whose resin is collected by bleeding from small cuts made in the bark and used as a spice in liquors, cooking and Turkish delight.

As the massif resolves into the gentle slopes of the Penedès Plain you’ve entered ancient wine country. Although many of the treasured old vines are being used for Cava production, a wine with major history in the region, there are well-known producers moving in to take advantage of these quality parcels to produce significant still wine. 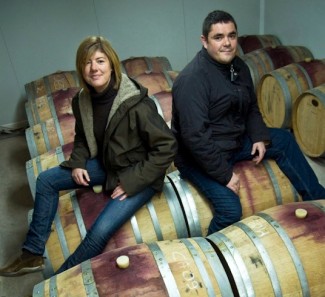 It’s in the Alt Penedès, the most inland and mountainous subzone characterised by relatively low yield and high quality, with vineyards that rank among the highest in all of Europe, that Irene Alemany and Laurent Corrio are producing 2012 Principia Mathematica. Their “garage” winery is located in the center of Vilafranca del Penedès where they vinify by variety and batch. The couple, who met at the University of Burgundy in Dijon, apprenticed in vineyards in France and California before settling into the Penedès region to start their own operation using Irene’s family vines.

Principia Mathematica is produced from 100% Xarel·lo (shah-REHL-loh), an indigenous grape variety that most Cava drinkers will recognize. In Irene and Laurent’s hands, 55 year old Xarel·lo vines from plots in Subirats and Garraf see fermentation in new French oak barrels of 228 and 700 liters. A third of the wine is then aged for nine months in stainless steel on the yeast (sur lie) with the remaining two thirds aged in oak barrels with occasional stirring (battonage). Production is tiny at 525 cases total.

The result is a wine of freshness and depth that fully expresses a Burgundian style of winemaking alongside high coastal Mediterranean terroir. Dried stone fruits and subtle floral aromatics exude from a crisp and balanced juice finished by hints of citrus and hazelnuts. Although it drinks beautifully at present, it can develop in the cellar for at least the next five years.

Regional pairing is one of the best ways to match food and wine. You’d be right to expect Principia Mathematica to pair well with seafood but it’s a far more versatile wine than that. Think grilled pork sausage and white beans (botifarra amb mongetes), thin-cut and flame roasted lamb chops finished with a sprinkling of fresh rosemary (costelles de xai a la brasa), charred and peeled eggplant and bell pepper (escalivada), and grilled scallions with Romesco sauce for dipping (calçots). Here is the easiest way to bring Catalunya to your own backyard.

Join us this Saturday at the shop to sample this captivating wine. And if you haven’t visited our website recently, our Selection of the Week is an earthy red blend from the Côtes Catalanes. Here is another Catalunyan wine expressing specific terroir from the other side of the Pyrenees mountain range, also from a young couple working a rugged landscape in the Agly Valley.